The Magic of Prashanti

Prashanti, the first place I stayed at in Ubud, is situated down a winding path in between rice fields, which you can only get to by foot or on a scooter. When I arrived in Bali it was 3am in the morning, which turned the short nighttime scooter ride into one of the most magical experiences.

There were so many stars. The moon had the perfect shape, a half moon sickle, just the way you imagine the moon to look like if you were to draw it. I’m fascinated by the moon, its different phases and its influence on our lives, so this added to my excitement and made the arrival even more special for me. Even though everything was dark, the short ride through the green surroundings, palm trees and rice paddies, with the starry sky and perfect moon shape was absolutely magical. There’s no better way to describe it, no better way to describe the overwhelmingly beautiful experience I had when I first arrived in Ubud. From the first few minutes I could tell I loved it. When we made our way past the bungalows, up the wooden stairs to my new home for the next two nights, everything felt so special. Everything was quiet, except for the sounds of the night, the crickets chirping, the water streaming in the background, and a slight wind rustling through the trees and rice paddies.

The bungalow itself was beautiful, so natural. Lots of wood, perfectly dimmed light, creating a cosy atmosphere. There was a balcony, two wooden chairs and a unique wooden table overlooking the rice fields. I stepped out onto the terrace and was just blown away (once again).

I looked around the room, the bathroom, the perfect little kitchen nook with filtered water, a kettle, and a little box of tea. So cute, homely and welcoming.

I wish I could have taken pictures straight away with the bed made perfectly, the towels folded the traditional Balinese way, so quaint and artistic. I wanted to capture Prashanti as I first found it - untouched, peaceful. That is the right word, the feeling I got in those first few moments - peaceful.

Instead of photographing everything, I sat down on one of the two couches under the slanted wooden ceiling, writing down what I was experiencing. I also found a pile of old books in the bedside table cabinet. The first one I picked up was a used copy of Elizabeth Gilbert’s Eat Pray Love. How fitting, seeing Ubud is where they filmed part of the movie.

So I sat there in total bliss, absolutely grateful for being able to stay at Prashanti, wishing I could capture that particular moment and share it straight away. It was beautiful, without being cheesy.

I went to bed at 4.30am, and woke up again around 6.30am to the sounds of birds, crickets and the rooster. My first breakfast at Prashanti was amazing, absolutely perfect, just like everything else. I wanted to live there - sitting outside on the verandah, overlooking the green tropical trees, the water streaming in the background and the birds singing. It was too good.

Made, one of Prashanti's team members, brought me green tea, fresh juice (dragonfruit, watermelon, pineapple and papaya), and pumpkin with rice and coconut. It had the perfect taste, a mix of sweet, slightly salty, creamy and just a hint of caramel from the palm sugar syrup. I ate it all in three minutes, while savouring every bite and sip of it. I was in heaven.

On my second morning I woke up to the sound of the rooster once more. It was exactly 6.30am again. I looked up. I saw the sun rise above the trees. Breathtaking. I got out of bed, picked up my camera, went outside. Scenes like this don’t last long. Maybe a minute or two if you’re lucky. Even as I was taking pictures, the sky changed, it wasn’t the same picture that I had seen just a minute ago. Yet it was magical. Early mornings have the best light. I went back inside, ready to go back to sleep. I looked at the bed, it was covered in golden light, appearing so cosy and welcoming.

In the afternoon I met Maya, the owner. Originally from France, she came to Ubud seven years ago and built Prashanti up from the ground. Maya left France in 1989, has called the Caribbean home, as well as the Canary Islands and Sri Lanka, before moving to Bali. She’s got a background in tourism, and used to run a yoga therapy and massage centre. Opening Prashanti as a yoga retreat and eco hotel just came natural after that, once she accepted what her gut had been telling her all along and letting go of any resistance she initially had. Her current plan is to add a massage centre to Prashanti, to complete the experience.

The Magic of Prashanti 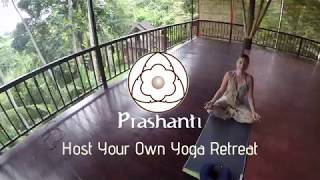 How To Host Your Own Yoga Retreat In 3 Steps

Nearby attractions whilst staying at Prashanti

A few days in Ubud, Bali